Universal lessons learned this summer – about peace, understanding and the power of Y

Universal lessons learned this summer – about peace, understanding and the power of Y 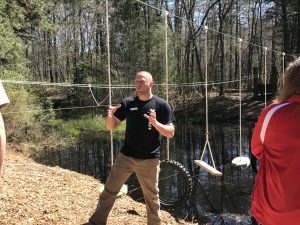 “Peace cannot be kept by force; it can only be achieved by understanding.” – Albert Einstein

How does one achieve peace? Where do you start and what does success look like when you’re finished? Those are some pretty difficult questions. Questions I never really intended to contemplate. However, this past summer, I found myself in the company of a group of people doing just that.

I had the honor of spending time with an amazing group of young Y leaders this summer. Together, about 40 of us traveled from all over the world to come together in a small corner of the world. We found ourselves YMCA Camp Orange in Ureki, a small village off the coast of the Black Sea on the southwestern corner of the country of Georgia, just north of Turkey. We came only loosely connected through our affiliation with the Y movement and the notion of building peace through camping.

For the past ten years, in conjunction with the YMCA of the USA, YMCA Europe has been implementing a project known as Roots for Reconciliation. Founded with the goal of creating a more peaceful world, through camping, RFR promotes deep summer camp-style experiences for Y leaders from around the world. The project specifically seeks to involve those whose countries are at conflict with each other. This is a long game, but it’s core, it’s the reason why every camp in the world exists. Why the Y exists. We build relationships. When people have experiences together, they set a foundation for trust, dependability, humor, and support. There is no better way in the world to forge relationships with others than to spend time at camp together.

Camp Orange was built specifically for this purpose – promoting peace through camping. Only just completed in 2015, it stands as the first and only camp in the country of Georgia. The team at YMCA Georgia and Camp Orange is phenomenal. There aren’t enough words to describe their remarkable hospitality, enthusiasm, and dedication. The concept of camping is still relatively young across Eastern Europe and this group is at the forefront in their region. As political strife causes artificial divides, their goal is to make their world just a little better, and believe YMCA camping will serve as the great unifier.

It’s at Camp Orange I was reminded of all those seemingly innocuous moments that unite us at camp. A spontaneous volleyball match or a late night card game. A repeat after me song during a hike and a riddle on a bus ride.  A new food that no one at your table can quite identify.

Then there were other more sensitive moments. We learned about each other’s families and passed on camp traditions. We shared our hopes and goals. And we trusted others with that information.

We came from various countries; Georgia, the United States, Ukraine, Russia, Azerbaijan, Syria, and Armenia. We spoke even more languages. Some of us knew others. Most were strangers. As the week went on though, those differences dissipated. As we continued to engage with each other in workshops, team building, and other camp activities, we became one community. We supported one another, built each other up, and soon called one another friend.

At camp, we don’t come separated by political or geographical boundaries. Despite any difference in values or beliefs, we come seeking understanding. To be understood. And it’s through camp, we may achieve peace.