YMCA Camp Ockanickon, Inc. held its annual campaign kick-off breakfast on Tuesday, Sept. 13 at the Ockanickon dining hall. The event, which featured heartfelt testimonials by scholarship recipients and alumni, started off with an invocation by Rev. Don Muller of St. Peter’s Episcopal Church, who noted the positive impact of a camp experience on young people. 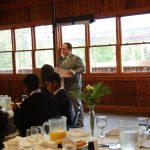 talked about the organization’s fundraising goals along with plans for making camp a more diverse and inclusive place. “We want camp to be a place the world strives to be like,” Mark said. “Our goal is to not turn anybody away who wants to come to camp. But there’s more we have to do.

“What I think would be an awesome dream come true is to have one third of people – those who can afford it – to pay their full way to camp, have one third pay part of the tuition and another third pay nothing at all,” added Mark, who has been at the helm of the 111-year-old camp since 2015.

According to Suzette Belz, camp’s vice president of development, the goal this year is to raise $325,000 to provide scholarships and financial assistance to kids who otherwise wouldn’t be able to attend summer camp. To date, she said, $235,000 – about 70 percent of the goal – has been raised. She added that Ockanickon has a long history of providing opportunities for children, teens and families to attend camp programs, regardless of their financial circumstances.

Suzette, whose own two children attended camp this past summer, said she was thrilled to be able to experience the magic of camp firsthand. “I’ve heard people say, ‘it’s a place where everybody feels accepted, like a home away from home.’ And with my own children attending this summer, it was beautiful to see. I was able to actually touch the impact.” 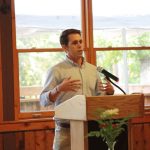 Also in attendance was Kohl Meyer, marketing manager for Bob Meyer Communities, which has been a family business in Medford for nearly half a century. Meyer said the company recently decided to partner with Ockanickon after spending a day at the 800-acre property. “It seems that everything we see you do here at camp is what we try to embody as a company,” he said. “It was a treat to be able to tour the beautiful grounds; we left that day knowing we would partner with you. I’m super stoked.” Beginning this year, for every house they sell, Bob Meyer Communities will send a deserving child to camp.

“We’re honored to be working with another organization with such a deeply rooted connection to the community,” Mark said of the partnership.

A touching part of the event was a speech by a Sarah Anderson, now a CEO of Lillie Leaf Solutions, and formerly a camper and staffer at both the day camp and girls camp at Ockanickon.

She talked about how the former camp CEO, Gary Graham, would greet campers on his regular jogs through camp. “That greeting truly set the tone for my entire camp experience,” she said. “It made me feel like I belong here, that this is my home.”

As a black child growing up in nearby Shamong, Sarah said she often felt like an “other.” A pivotal life experience happened to her when at age nine, as a basketball player, she would often get technical fouls called on her. “I didn’t understand it, because I was just playing like all the rest of the girls.” A tall and admittedly awkward fourth grader, Sarah said she didn’t understand what she was doing wrong. “I was on the bench, in tears, because I had been fouled out of a game. What did I do wrong? I wondered.” Eventually, she realized that some parents on the sidelines were insisting that the referee call fouls on her, for fear of the safety of their young daughters. “For some reason, they thought I was dangerous. But what they didn’t realize was, that I was somebody’s daughter … that I needed protection, too. It made me feel that by just being who I was, I was going to make people feel scared. So I couldn’t be who I am, because who I am is wrong.”

Fortunately, a loving and supportive family, coupled with her experience at Ockanickon, changed that self-perception. “My experience at camp made me feel that I belong. The Y’s four core values (caring, honesty, respect and responsibility) is how I learned to live my purpose and to eliminate all allusions of otherness.

“You have no idea the impact that you’ve had on my life,” Sarah concluded tearfully.

Toni Farmer of Urban Promise thanked the camp for providing the opportunity for kids from Camden to attend camp. “I am blown away by how beautiful it is here,” she said. “At Urban Promise, we impact over 800 kids every year in Camden, but what you have here is something we can’t give them. Camden is a nine-square-mile city and a lot of it is entirely paved.”

Toni also thanked camp for making the kids feel safe and loved. “Feeling safe is different for kids in Camden. I want you to let that sink in; you’ve had a huge impact on these kids.”

Jodina Hicks, the executive director of Urban Promise, introduced several young scholarship recipients, including Mia, who said camp taught her that everyone essentially has three zones: a comfort zone, an out-of-comfort zone and a terror zone. “My take away from camp is this: Don’t step into your terror zone but do step out of your comfort zone.” 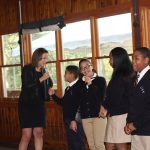 Another scholarship recipient from Camden, Jermaine, said that when he found out he would get a scholarship, he packed his stuff for sleepaway camp two months before it was time to go. “I told my mom, ‘I’m going to miss you … but I’m not.’”

“They really worked hard to be able to come to camp,” Jodina said of the kids. “This place makes we wish I could go back in time and come here, too.”