The Day they put Bacon in the Pretzel Melts!

The Day they put Bacon in the Pretzel Melts!

by Greg Keresztury, Director of Operations 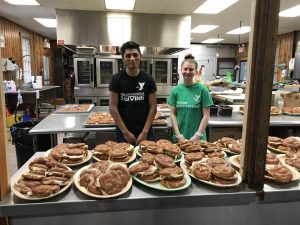 One of the reasons camp is so great is that at camp, #MagicMoments occur. Most of them, of course, are unscripted and happen naturally as campers interact with one-another, and with their counselors.  However, a good camp director is always thinking about what he/she can do to help facilitate or create those moments – in fact, a lot of our staff think this way!

This summer, I had the opportunity to eat lunch with various villages at Lake Stockwell Day Camp, and ask the campers what they loved about camp, and for an idea of something we could do to make camp even better in 2018. I received lots of wonderful feedback. Among many responses, the campers loved the changes to our menu for this summer, they loved the new docks at Cherokee beach, and they loved the science and music programs at Stockwell.

One camper, an Algonquin (typically around 12 years old), suggested that bacon be somehow incorporated into a lunch-time meal. When the camper said this, the eyes of the other campers at his table all lit up with excitement! As any Ocky/Matolly camper/parent knows, bacon breakfasts are a big thing at our sleepaway camp – so how could it be incorporated into a Stockwell meal for 2018?

As I pondered the question with our Food Service Director, Jason Ostroski, I talked with more campers from more villages about the same topics, and bacon came up numerous times.  So, we figured that we’d be nimble, and rather than waiting until 2018 to make a change, we agreed that the final #PretzelMelt meal would have bacon in the melt rather than ham.

For those not familiar with camp meals, pretzel melts are tremendously popular – a camp signature!  A pretzel melt is cheese and ham cooked in-between two pretzel buns – basically a soft pretzel with ham and cheese!  Gluten-free, vegan, and vegetarian options of this delicacy are offered as well.

So, during Session 10 at Lake Stockwell Day Camp, Chef Kimmie and her team of cooks prepared pretzel melts with bacon instead of ham, so when the campers entered the dining hall that day, they received a big surprise. As pretzel melts were announced for lunch the cheer was audible and excited, as usual, but when the campers learned that bacon was in the pretzel melts, they grew even louder!

While it may seem silly that such a small change would bring about such excitement, the change did mean something to many campers. The change meant that they knew we were listening to them and taking their suggestions seriously. For our Stockwell Superstars who attended 10 weeks of camp, and many other campers who attended multiple session of camp, the change was a fun twist on a camp-meal favorite.

The reviews of the bacon pretzel melts were great; many campers thanked us for the change and bragged about how they ate multiple pretzel melts that day because they were so good. I was sure to remind the campers I spoke with to keep the feedback coming, as this is their camp, and we want to keep improving the experience for them over the coming years.  In the meantime, I bet a number of Session 10 Lake Stockwell Day Camp campers will fondly recall ‘the day they put bacon in the pretzel melts…’