The historical and operational perspective behind our name

The historical and operational perspective behind our name

By Greg Keresztury, Director of Operations

Over the next few months you’ll learn more about our organization and our umbrella name change.  Our CEO gave some of his thoughts on Tuesday, which you can read about here. Below, I’ve shared my thoughts on both the historical and operational perspective behind the change.

When asked “where are you?” when standing in the dining hall parking lot, someone who went to camp in the 70s before Lake Stockwell Day Camp began operations would no doubt say, “Ockanickon!”  However, a 5-year-old camper on the property in July 2018 would no doubt say “Lake Stockwell Day Camp!”  It gets even messier when you pose the question to a Temple Graduate student participating in a weekend teambuilding retreat in October.  Is the parking lot the Outdoor Center?  Finally, what would the School’s Out at Camp participant say, who is spending a school holiday at camp in the fall, winter or spring?

My point is, there really isn’t a clear answer – as people interact with the organization throughout the year through a number of different departments.  One could suggest the answer is “YMCA Camp Ockanickon, Inc.,” but try telling a Matolly girl that she is at YMCA Camp Ockanickon, Inc. at the Matolly Dining Hall J. All joking aside, explaining to a group leader for a class trip from a school in New York, for example, that they’ll be going to the Matollionequay side of Ockanickon can be quite confusing for the group leader when both a large portion of the property and the umbrella name say “Ockanickon”.

When camp started at this location in Medford, an umbrella name for the organization was less complicated, as there only was Ockanickon.  However, there was a goal for camp to grow and be more than a boys sleepaway camp, as evidenced by the name that appears in the 1926 Camp Ockanickon camper handbook: “The Ockanickon Camp & Conference Committee, Inc.” (See the photograph, below). 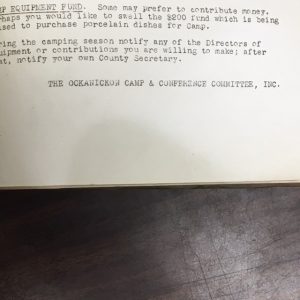 Our organization’s umbrella name was also less complicated when our only departments were Ockanickon and Matollionequay, and the two camps operated on different sides of the property (as they still do today).  However, even then we didn’t have a clear, unifying answer.  Rather, various names were utilized, including “The Y.M.C.A. Camps” (see the top of the holiday card, below), and “Camps Ockanickon and Matollionequay ‘Among the Pines’” (see the bottom of the same card, below at right). 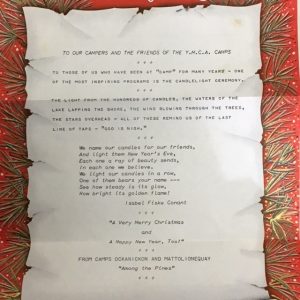 In 1961, a map of the camps was created and entitled: “YMCA Camps ‘Among the Pines in Medford, NJ’ a Part of the Program of the YMCAs of Burlington, Camden, Gloucester, Monmouth Counties.”  (See a photograph of the map, below). 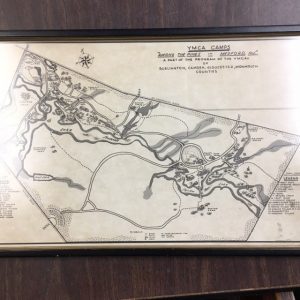 Our name kept changing, as various options were explored to best have an externally facing name while messaging who we are, and what we do.  A 1979 cover letter from the board president at the time was written on letterhead for “YMCA Camps: Ockanickon for Boys, Matollionequay for Girls” (see the photograph, below). 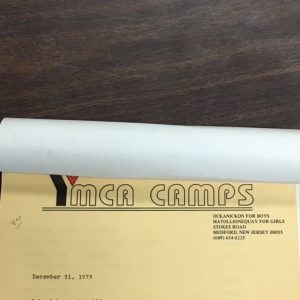 The story goes on over the years, with the focus of the name remaining on our two single-gender sleepaway camps, and eventually our coed day camp (Lake Stockwell).  However, prior variations of the umbrella name failed to account for our departments and programs that do not operate during the summer, but serve thousands of people each year (collectively) such as School’s Out (school aged child care) and the Outdoor Center (also referred to as ‘Conferences & Retreats’, or ‘Conference’ for short). In fact, we find that people to this day are surprised to learn that we serve 4 times as many people during the non-summer months (over 12,000) than we do during the summer camp season!

Accordingly, our staff conducted an on-camp retreat to address the issue of our umbrella name.  The goal was to develop a name that made it clear that we offer more to the community than summer camp, while also providing us with the ability to answer the question “where are you?” when standing in the parking lot referenced in the introduction to this post.

The reality is, our non-camp departments, both the Outdoor Center and School’s Out, as well as newer program initiatives such as our Teen Leaders Club, are an incredibly important part of what we do, and how we live our mission. The name, ‘YMCA of the Pines’ brings these other branches of our organization under the same umbrella, while also preserving flexibility for new, not-yet-determined initiatives that we will tackle in years to come as we continue to meet and respond to the needs of the community.

I hope that this post helped provide more insight and clarity into the umbrella name change decision. More so, I hope that the post underscores the point that our organization, regardless of the name, will also seek to meet and respond to the needs of the community, whatever that may look like in the years to come!