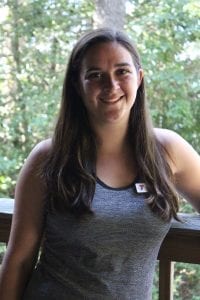 I have been a member of the Stockwell family since 2012. In all of this time, I have seen firsthand that part of what makes camp so special is the relationships that people form while they are here. Everyone finds a connection with someone while they are at camp. I especially observe how strong these relationships are during the last few weeks of camp. I see tears as campers say goodbye to their new friends, as staff says goodbye to each other, and as staff members say goodbye to the campers who changed their lives. Each relationship and bond is unique and special. But this summer, I saw a bond formed between two campers and a staff member that changed my own life forever. It was something so strong that I had never seen before, but hope to see again.

At the Y, we serve a variety of families. We believe that nobody should be turned away from what they need. This is the story of two siblings who needed a little extra love while they were at camp. The family had recently been through a very traumatic experience, and needed camp more than ever. They had each other, but that was really it. This is where camp stepped in.

The young camp family had a variety of needs in their first week. As with a lot of young campers, there were tantrums due to over-stimulation, and refusals to use the bathroom leading to accidents. These issues are pretty common with younger campers. Camp is a new and exciting experience for most, but for some it can be very scary or overwhelming. Tantrums and accidents can be a very daunting concept to an 18-year-old counselor. But not for this young man. He stepped up to the plate and did what all the best counselors do: anything it took to accommodate the campers.

It was because of him that the accidents became few and far between. It was because of this counselor that the tantrums were minimized. He stopped at nothing to give these kids what they needed. All good behavior was rewarded, and all behavior that needed to be corrected was done so with such respect and understanding.  The trio spent so much time together, the campers became this counselor’s little sidekicks. Whenever you saw this counselor, the campers were not far, making jokes or painting his face.

There was a huge difference in these campers’ lives from the day they came to camp to the last day they were here. They became excellent listeners, they loved participating, and most importantly, they eventually had the most beautiful and giant smiles on their faces the moment they stepped foot on the property each morning. It was all because of the patience and kindness that the counselor showed them. I really hope that this counselor understands the impact that he had on their lives. These campers grew so much – both of them even won our coveted Red Feather award!

The Red Feather is more to our campers than just a ten cent red arts and crafts feather. It represents the four core values of The Y: honesty, caring, respect and responsibility. It is given out to campers who demonstrate these characteristics and who grow to understand what they truly mean. These campers are examples to all other campers of what it means to be a good person. When I saw that these campers were going to win the feather, I was overwhelmed with a feeling of joy. I was so happy that their counselor had helped get them to the accomplishment. Our director Lynn and I decided it was time for the counselor to get the Red Feather as well. He deserved it greatly at this point; we wanted his hard work and dedication to be recognized.

Now that it’s October and camp is over for the season, I find myself missing the sounds of it. I miss the cheering, the laughter and the singing. This counselor has gone back to his home in the United Kingdom, and his little camper buddies are now in school. I miss their trio the most.  I miss overhearing their silly conversations at lunch. I miss seeing their big smiles because their counselor let them borrow his lifeguard whistle. I miss seeing him help them with their shoes. I miss seeing him be their advocate. Every time I see the pictures of them with their red feathers, it warms my heart. I hope that the bond that they formed and the lessons that all three of them learned are something that will be carried through their entire lives.